Dial Rewards - get rewarded for what you do anyway!

Dial has come up with a great way to rewards its customers. They have started a Dial Rewards programs that lets you earn bonus points for making purchases of a variety of Dial products.
Sign up is very easy. Just go to www.dialrewards.com and sign up with an email and a (secure) password. You will get a welcome email to activate your account within a few minutes.
Then you are ready to go. Enter codes from purchases to win entries for great gift card sweepstakes or complete a variety of brief activities such a sharing informational Dial items on social networking or completing surveys or something as simple as watching a brief video. Points add up very quickly and entries to the sweepstakes are requiring only 10 points each!

I have started completing surveys and also watching some of the videos. It is fun, a nice break from household chores or work and then you fell refreshed to continue with what you were doing before.  Surveys are quick and super easy to complete. 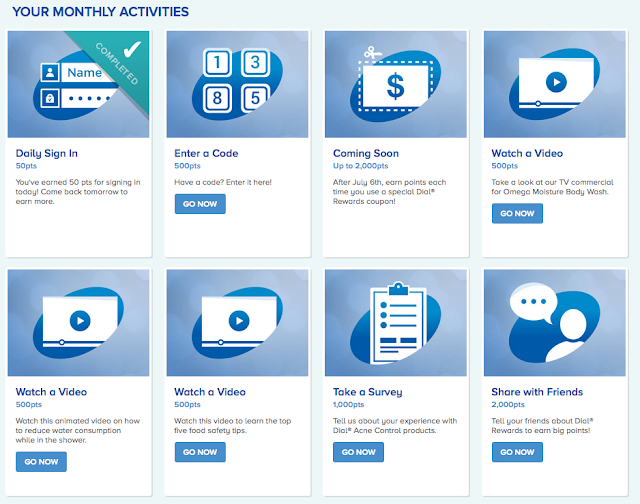 So, go visit www.dialrewards.com to sign up and join in on the fun!

Disclaimer: As a member of Purex Insiders, I was given a promotional code to enter for prizes. The opinion expressed in this post is solely my own and has not been influenced by any third parties.
Posted by kratzy at 2:40 PM No comments:

I received through Crowdtap three tins of tune in exciting new flavors. The Bumble Bee® Prime Fillet® Gourmet Flavors come with sun-dried tomatoes, jalapenos or chipotle. This makes prepping a tasty lunch or a light dinner even easier than before. Need your protein, but do not have the time to prep some fresh meat or even boil an egg? No problem, pop open a tin of tuna from Bumble Bee® Prime Fillet® Gourmet Flavors and you have your protein already prepped and in very tasty form.


Disclaimer: Through Crowdtap I received free samples in exchange for an honest review. The opinion expressed in this post is solely my own and has not been influenced by any third parties.
Posted by kratzy at 6:59 PM No comments:

This book is interesting in a number of ways. First of all, four female authors got together to write a book about the post Civil War life in the South. In addition, each short story is complemented by a recipe that is full of Southern tradition and makes your mouth water. Oh yeah, the recipe is also tied to the story and to me, this was similar to some of the traditional recipes in our family that all came with a story as well. Sometimes the story was about a special meal at which the food was served or sometimes the recipe simply was explained through a story so we as kids understood the significance of a special meal on a holiday.

So in this book Tamera Alexander, Shelley Gray, Dorothy Love and Elizabeth Musser tell us their story of the life in the South after the Civil War. For Tamera Alexander, this story is about a woman desperate to visit her now lost family home. Bought by a Northerner, an attorney, who plans to present this house to his fiancee, Savannah Darby needs to get at least once back into the house to find something very precious to her, left there by her father. Will she succeed or is the house, like the traditional Southern life, gone forever?

Similar to the story "To Mend a Dream" by Tamera Alexander, the stories by Shelley Gray and the authors also deal with the struggle by women and men in the South to adjust to the new reality of a land now under new leadership and property lost to the winners of the war. Society is not the way it used to be, but in some way things are not so different. Women and men still fall in love and friends from before the war are still friends and long lost lovers are still around, so maybe there is hope that not all is lost.

When Russel Stark returns home after the war in "An Outlaw's Heart" by Shelley Gray, his mother is ill and his former love has not changed a bit from a lively, radiant beauty she was before the war. Can Russell meet his mother's expectation and save the family homestead, while also living his own life?

I thoroughly enjoyed reading the interpretations of post Civil War life by each of the authors in the book. Each story presented a different facet of Southern Life after the war and how people need to adjust to the new reality, while still holding on to the old family and friends.

Disclaimer: I received a free copy of this book in advance of the publication date for review. The opinion expressed in this post is solely my own and has not been influenced by any third party.
Posted by kratzy at 7:00 PM No comments: