Not surprisingly, a lot of the solutions that Cal Thomas proposes as working in this book are traditional conservative ideas, such as less government, tough on crime. Nevertheless, it is nice to see that the author does not exclude conservative politicians from criticism. The book is logically organized into four parts, using the past to learn from, focusing on people and not party lines, a belief in our ability to overcome the current gridlock and the last chapter exposing the solutions and the mistakes that currently still exist and stop any advancement in solving our issues. 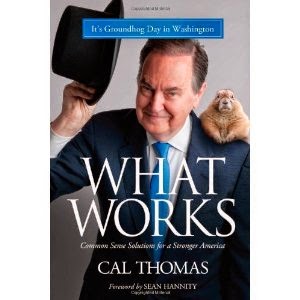 Cal Thomas has a lot of experience dealing with DC, congress and the beast that we call politics. I am not surprised that even he has a reached now a level where he feels that things need to change because we are just running around in circles trying to find a solution to our problems. And problems we have, violence killing too many young men in inner cities, welfare costs spiraling out of control, budget deficits on the rise. So what are we doing to solve these issues and is any of it working? According to Mr. Thomas, nothing is currently working, yet politicians keep trying the same failing recipes all over again, in the hopeless hope that the solution will eventually work, if just tried often enough.

What he now proposes are select solutions that have worked over the past centuries and recommends that politicians of both parties rethink their ways and get the guts to leave gridlock and the new establishment behind, to look for really new approaches, which according to Thomas may include looking back fairly far behind in history.

Disclaimer: I received a free copy of this book in exchange for an honest review. The opinions expressed in this review are solely my own and have not been influenced by Thomas Nelson Publishing or any third party.
Posted by kratzy at 4:43 PM