Duck Dynasty - yes, I too got hooked on that show

I am rarely watching TV these days because I hate with a passion most of the reality shows. I think that most of my TV viewing is along the lines of Antiques Roadshow and some occasional Storage Wars thrown in. These shows I watch because I love to go to garage sales and did actually attend the Antiques Roadshow years ago in Des Moines, IA. 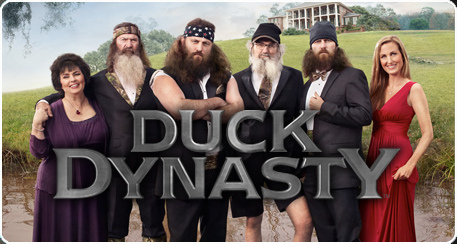 By the way, if you ever have a chance to get tickets to attend an Antiques Roadshow, I encourage you to go. It is a lot of waiting in line, but it is also fun and it is rare that a large number of people are excited and for all the right reasons. Yes, while waiting in line, you do hear a shriek ever so often because people have hauled heavy china items and now dropped them before having the assessed, but the crowd is extremely well behaved considering the number of people involved and the hours you need to wait in line. It does help that most of the people are middle age or senior citizens, but heck, Antiques Roadshow is an adventure you can tell your kids about. In my case, the visit in Des Moines was good since I found out that the trades my grandfather did after the war were as good as my Goodwill buys. Both turned up nice profits! 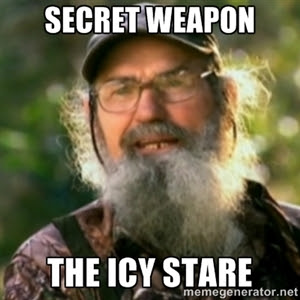 Anyway, one show I now eagerly await is Duck Dynasty. I have only been to New Orleans and never visited any other place in Louisiana. I also do not go hunting and have never handled a gun. While in Minnesota I did go fishing a lot and since there was a Dick's Sporting Goods store in my neighborhood, which I frequently went to and looked at fishing gear. I do love fishing. If nothing else it gives you an excuse to be outside and also prevents other people from being loud around you since you can glare at them as an indication that they are disturbing the fish.

Which brings me to Duck Dynasty and Uncle Si in one episode using his deadly glare. Yeah, that sounds about right to what I used when people came close during my fishing and did not even know as well as my dog to be quiet. My dog had been trained to simply stay next to me for hours and not bark. So people should know to do the same.

Coming from a rural area of Germany called the Hunsrueck, which is fairly poor, has lots of forests and accordingly lots of people involved in hunting, the Robertsons keep reminding me of characters from back home. Whether it is the habit of telling stories that are only half true, Miss Kay being proud of her cooking, grandparents not getting computers and modern technology, people at work being more like family than mere colleagues - I grew up with these characters and so watching Duck Dynasty is like watching people from my hometown in Germany. While no one back home makes duck calls, people do take a pride in their craft and work usually involves lots of talking in the few manufacturing places that remain.

Not sure that I have a favorite character in the Duck Dynasty show itself, but each character has bits and pieces in which I recognize someone from back home. So you know where I will be Wednesday at 10PM - watching a new episode of Duck Dynasty.

Some people say the show is scripted. You don't say! I would hope that the Robertson family and employees even on their most adventurous day would not consider flooding a loading dock a normal routine way to waste a few hours, but if they paid my family enough money, we would have certainly agreed to have a frog race in the backyard. I had enough frogs as pets when I was a child. So we only had a frog hopping the around office ever so often. Maybe the Roberston family can have a frog race, they certainly talk enough about frogs. ;) I would not even claim credit for that idea.
Posted by kratzy at 7:40 PM